In the United States of America, chicken chop is categorised as soul food, an American tradition, but all the way over here in Malaysia, we label chicken chop as street Western food, food that has been part of our food heritage. Hence, with an insatiable hunger for the comfort that chicken chop brings to our tummies, we made our way to these restaurants and named some of the best chicken chops in Petaling Jaya. RIP to all the chicken that had to be sacrificed along the way. 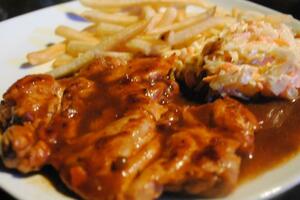